Responsible for this content
Ammergauer Alpen GmbH Verified partner  Explorers Choice
Peter Stephan-Langner
on the May 07, 2016

Circular route from Oberammergau through Weidmoos Moor to Graswang and back. Accessible for wheelchair and wheeled walker users and for prams.
easy
15 km
3:53 h
74 m
74 m
As soon as you reach "Arme-Seelen-Straße", you are in the Weidmoos Moor, a nature conservation area that is a particular jewel in the landscape during all the seasons of the year.

Glass-clear streams wend their way through the moss, feeding the River Ammer. The river has its source in the Graswang Valley on the border with Austria, where it is initially known as the Linder and flows past Linderhof before seeping into the gravel of the valley.

In the vicinity of the farmsteads in the hamlet of Rahm (the "Rahmbauernhöfe") and above the Ettal Mill, it remerges in the form of several bubbling springs. Make your way through the Dickenwald forest to the Rahmbauernhöfe. The Dickenwald forms a particular kind of woodland referred to as a "ravine forest".

This comprises a mixture of ash, maple and elm that grow so quickly that conifers or beech trees have no chance and are overrun. You will soon reach the "Rahmbauernhöfe", which date back to 1803. In this instance, "Rahm" has nothing to do with "Schlagrahm", the German word for whipped cream. It designates meadows within a mountain forest.

In times past, the Graswang Valley was probably naturally forest free due to the fact that growing woodland was constantly cleared away by floods. Just like throughout the whole of the hike, the final section towards Graswang continues to offer fantastic views of the highest mountains in the Ammergau Alps, such as the Notkarspitze or the Kienjoch to the South or the imposing Scheinbergspitze and Klammspitze to the East.

The small municipality of Graswang, which you will shortly reach, is definitely one of the most picturesque villages in the Alps. Although its inhabitants previously lived from agriculture and forestry , the main role today is played by tourism. Return via the Ettal Mill passing the Dickelschwaig, which is located in the centre of a large field. Previously a stables building for the abbey, the Dickelschwaig later became a forestry office.

Proceed through the Mühlwald forest to return to the Weidmoos Moor and back to Oberammergau.

You can enjoy an unforgettable hiking experience in the Ammergau Alps as long as you have the right gear. Visit the "Best of Wandern" Test Centre in Bad Kohlgrub to try out the latest outdoor equipment free of charge.

Begin at the "Ammergauer Haus" and proceed in a southerly direction to the Ammer Bridge. Cross the Ammer and bear left after the bridge on the hiking pathway.

Passing the tennis court, take a sharp right bend into "Arme-Seelen-Straße". The route will take you into the "Weidmoos" nature conservation area and along a small stream known as the "Frauenwasserl", which particularly in spring is well known for its snowflakes, stemless gentians, bird's-eye primroses and orchids.

About 200 metres before reaching the main Ettal - Graswang road, turn right onto Sonnenweg (parking available), which begins behind a small bridge over the "Frauenwasserl". Passing the "Rahmbauern" on a path that is approximately 1 metre wide and constantly goes uphill and downhill,  you come to Graswang.

A visit to the shady beer garden at the "Fischerwirt" is highly recommended. After continuing for about 30 metres down the main road in a southerly direction, the second stage of the tour takes you down a forest path to the right. Go over a bridge, pass the "Forsthaus Dickelschwaig" and proceed along an up and down route through the Mühlwald forest until you meet and then cross the main road(be aware of motorised traffic).

The hiking route continues close alongside the "Frauenwasserl" through the "Weidmoos" nature conservation area until the path forks into three at a small bridge.

The left-hand fork leading over the bridge will take you back to your starting point via "Armeseelenstraße".

Guests in the Ammergauer Alps Region can use their electronic guest pass or the "KönigsCard" to obtain free bus travel.

A95, B23 to Oberammergau via Ettal

Parking spaces in Eugen-Papst-Str. opposite the Tourist Information Office
Arrival by train, car, foot or bike 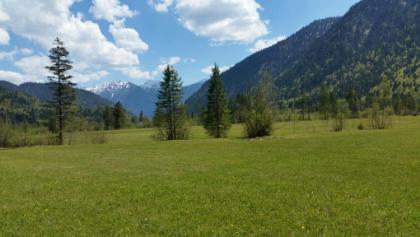 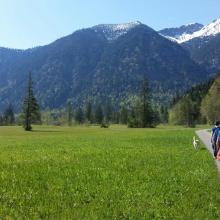