Gliding leisurely through the landscape on or getting your pulse racing in skating style – cross-country skiing is a varied and at the same time healthy sport that enjoys great popularity. Almost every winter sports destination offers opportunities to practice the Nordic sport on different trails while enjoying the snow-covered winter landscape. On this page we will give you an overview of the different cross-country skiing techniques. 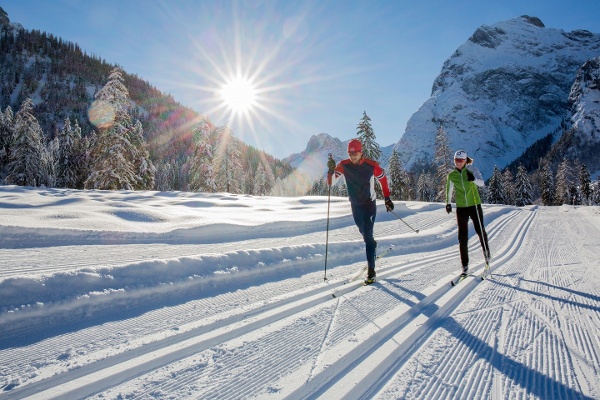 ...is where cross-country skiing began. Classic skiers follow the trail inside a fixed track.

To move forward, you perform a diagonal movement, moving the right arm and left leg backwards and forwards – and vice versa. You push yourself off with foot. Important is the active use of the poles.

The classic style does not require as much sense of balance as skating and is not as strenuous. Beginners will find it easier with the classic style, also because steeper passages are easier to master. 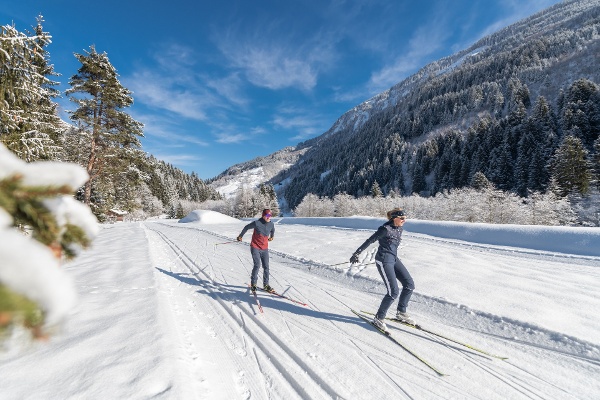 ...is still relatively new and has only been known to a broad public since his participation in the Nordic World Ski Championships in 1985.

Skating is a bit faster than the classic style. You are not in a fixed track, but use a smooth, prepared snow surface.

The movement in skating is sideways – you push off with your skis to the side and combine it with the use of poles. The movement of the skating technique is reminiscent of the movements of inline or ice skating. When skating, the most important thing is a good sense of balance and coordination, because most of the time the body weight rests only on one leg.

A relatively new trend is also cross-country skiing in the so-called “backcountry“ – i.e. completely without a groomed trail. Especially in Scandinavia, this technique is very popular with all those who are not primarily interested in sporting success, but more in an undisturbed experience of nature.

To follow this trend, you need special backcountry skis. These are wider and heavier than classic or skating skis and therefore much more stable. They also give more lift, which becomes more important the deeper the snow is. So you can imagine this technique a bit like ski touring in flat terrain.

In order to avoid any nasty surprises on the first descent, it is important to learn how to brake properly right at the start. In contrast to alpine skiing, the foot is flexibly connected to the ski. In addition, cross-country skis usually do not have steel edges, so that they cannot be brought to a standstill by shifting weight and using edges.

This is why cross-country skiers often brake with a snow plough. You shift the body’s center directly over the ski, push the ski ends outwards and move the ski tips towards each other without them touching.

More professional skiers usually turn their skis parallel to slow down and stop. This braking variation is carried out similar to alpine skiing or ice skating: with rapid weight shifting. Provided you have learned it properly and practiced it thoroughly this looks very elegant.

How to learn cross-country skiing

All those who want to learn cross-country skiing are best advised to consult a trained ski instructor or experienced cross-country skier. The correct demonstration and imitation of the cross-country skiing technique will prevent you from getting used to wrong movements from the start. It is also advisable to concentrate on one style at the beginning and not to learn both techniques at the same time.
Fotografie: visitfiemme.it
Since the skating style is more demanding in terms of coordination and condition than the classical style, it is worth starting with the classical technique first. However, if you have already been active in inline skating or ice skating and have a good basic physical condition, you can also start directly with skating. Ski instructors and trainers help with special exercises and proven training methods to rehearse and improve the individual movement sequences.