The Cultural Trail in the Lötschental takes visitors through one of the most beautiful mountain valleys in the Swiss Alps and offers a perfect alternative to the busier Alpine Trail.
closed
moderate
9.1 km
3:00 h
550 m
240 m

The Cultural Trail in the Lötschental takes visitors through one of the most beautiful mountain valleys in the Swiss Alps and offers a perfect alternative to the busier Panoramic Trail (Fafleralp - Lauchernalp), as the Cultural Trail on the valley floor also follows a different route to the well-travelled valley road. Your route will take you along the picturesque River Lonza. From the shady side of the valley, you will have an opportunity to marvel at the typically scenic Valais villages of Ferden, Kippel, Wiler and Blatten in all their splendour. There is an opportunity to leave or join the trail at each village and there are also many places to stop off for something to eat. You can return from Blatten every hour using the postbus or on foot. This route can also be hiked in the opposite direction and is also ideal for all-terrain pushchairs (with the exception of the section between Goppenstein and Kippel).

From the starting point in Goppenstein, the Cultural Trail heads into the Lötschental from the Felsheim Restaurant on the left-hand side of the river. Here the River Lonza has only a fraction of its normal flow, as its water is collected in a reservoir 2 km further upstream. Ferden, the lowermost village in the Lötschental, lies just beyond the reservoir. Chastel Hill in Ferden offers a first view of the village, slopes with Alpine meadows as well as the Langgletscher (Lang Glacier) and Lötschenlücke Gap at the upper end of the valley.

On route to Kippel, you will first come across the location of the former valley station of the Kippel-Haispil-Hockenalp ski lift. The construction of this lift, which was carried away by an avalanche in 1980, launched the winter sports age in the Lötschental in the 1960s. However, the slopes were not attractive enough and soon the ski lift on the Lauchernalp and the Wiler-Lauchernalp cable car, which were constructed later, superseded the popularity of the original lift. In Kippel, you can still marvel at the remaining older timber houses, as well as the Hotel Lötschberg (built in 1908) alongside modern chalet buildings built in a range of styles. Some of the three-storey houses constructed in the older centre of the village even date back to the 17th century. A visit to the Lötschental Museum in Kippel best illustrates how the valley has changed over the years.

While the other villages are more unstructured scattered villages, the next village of Wiler is characterised by the regularity of its village centre. Following a fire in 1900, which destroyed the entire village, the inhabitants rebuilt the village around a chessboard pattern and, this time, stone was the material of choice.

You pass the oldest hotel in the valley in the hamlet of Ried, the Hotel Nest- und Bietschhorn, which was built in 1866, seven years after the first ascent of the Bietschhorn by the Englishman Leslie Stephens. The trail continues to Blatten, where the modern church with its colourful windows and graduated roof grabs the eye. At the end of the hike, make a brief detour into the old village of Blatten with its village oven, sawmill-gristmill-weaving mill complex and village hall.

The 1:25,000 scale hiking map is your perfect companion for an unforgettable day's hiking in the Lötschental. Available from the Lötschental Tourist Information Office in Wiler or online at www.loetschental.ch/webshop

Goppenstein railways station can be quickly and conveniently reached by rail and bus.

You can park your car in the car park at Goppenstein railway (not free). 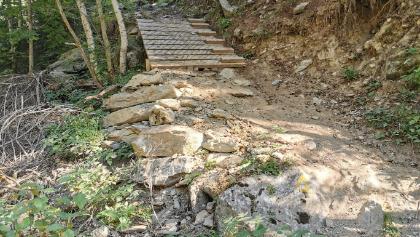