Responsible for this content
Hochkönig Tourismus GmbH Verified partner  Explorers Choice
Max Mustermann
on the May 04, 2018

Through the dark Hölln Graben to heavenly views at the sunny Hochkönig.
moderate
Distance 11.3 km
Duration4:40 h
Ascent1,163 m
Descent186 m
This long, but not too difficult hike offers great viewpoints on the surrounding mountains. The first stage of the Salzburger Almenweg leads on varied paths through the dark Höllngraben to the sunny alpine pastures of the Hochkönig.

Safe Hiking needs prior information and preparation. Please follow the rules for proper behavior in the mountains.

And do not forget: extensively drink during the tour!

The hike starts at the train station in Pfarrwerfen, where you will also find plenty of parking. After crossing the Salzach, the trail heads north for a short way, branching off to the left at the Reitsamerhof. Behind the inn, a steep supply lane leads up to the Schwabegg with its glorious views of the Tennengebirge.
Now a relaxing, approx. 5km long section through the Höllntal without any significant ascent follows, passing the former Gasthof Hölln.
Just before Jagdhaus Hölln, the trail branches off to the left and ascends to the Grünmaissalm.

VARIANT: Just before arriving at the Grünmaißalm, we turn to the right and follow a trail which, after around 1 km, branches left and becomes steeper. This small path crosses a forestry road, leading past the Steinalm (now derelicted) up to the Mitterfeldalm.

A few meters before reaching the Grünmaißalm we finally leave the forest and enjoy the marvellous view of the Hochthron towards the north east. At the alpine pasture the forest road ends and our hike continues on a trail that starts slightly above the hut. After about 1 km, we reach the forest road once again, heading west until our trail branches off to the right, acsending quite steep. This occasionally shady trail ends at the Stegalm. Even before reaching the alpine pastures of the Stegalm, the forest thins out, and allows us magical views on the Hochkönig massif.

Before we reach the Mitterfeldalm we have to ascend another 270 vertical metres. Staffed during the summer months, this is the first refreshment station on this route. A sunny panoramic path leads slightly downhill to the Arthurhaus and the alpine dairy Schweizerhütte , the second stop of this route.Hikers have the possibility to take the bus to Mühlbach, Bischofshofen and further to Pfarrwerfen.

From the north via the A10 motorway, exit 43 Pfarrwerfen
From the South: Motorway A10 , exit 44 Pfarrwerfen

Book recommendation by the author

Things to Bring if Staying in a Mountain Hut 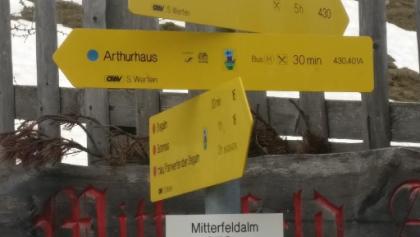