Felsenmeer Hemer – Chaos of rocks on the outskirts of Hemer

Between 250-year-old Beech trees, the Felsenmeer (= chaos of rocks) consists of massive limestone blocks that are stacked up like towers and waves with numerous caves and impressive collapses, some of which are more than ten meters deep. With its length of 700 metres and width of up to 200 metres, the area of jumbled rocks can only be properly seen from specially constructed paths.
easy
3 km
0:49 h
58 m
58 m
In the Devonian period a coral reef was created in tropical waters at today's eastern fringe of Hemer. Later it developed into a ridge of compact limestone extending from Wuppertal via Hagen and Hemer as far as Balve. Since as long ago as the ninth century, iron ore was mined in the area of today's Felsenmeer Nature Reserve. Today the chaos of rocks is largely covered by Sweet Woodruff-Beech forest, a valuable habitat for Wood Warblers, Grey-headed and Green Woodpeckers, Slow Worms, Noctule and Daubenton's bats and many other bird and animal species. Due to the lime-rich soil, plants like the Wood Sanicle, Bird's-nest Orchid and Arum are relatively frequent. These species are however, unknown or extremely rare on the acidic soils which prevail elsewhere in South Westphalia.

You are not allowed to leave the trails or paths in the Felsenmeer.

From the starting point, the trail at first follows the street "Felsenmeerstraße". It leads past the entrance to the Heinrichshöhle cave. At the top of the street, you will find yourself at the edge of the Felsenmeer. Starting from the path around the Felsenmeer, you can follow a network of trails and specially constructed paths, which lead through middle of the area.

The town of Hemer no longer has a railway station with regular rail transport.

Various bus lines depart from the central train station of Iserlohn and the railway station in Menden to the bus station (ZOB) in Hemer. From there, town bus line No. 2 runs in the direction of Hemer and Apricke as far as the bus stop "Sundwig Meise". The starting point of the tour is just a few dozen metres away from that bus stop.

The car park is located on the street called "Hönnetalstraße" opposite the junction with "Felsenmeerstraße".

Do you have questions regarding this content? Ask them here. 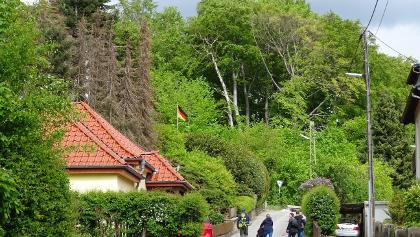 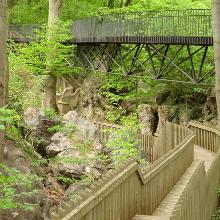 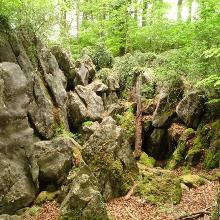 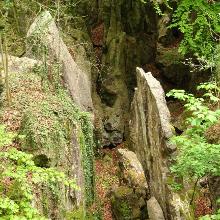