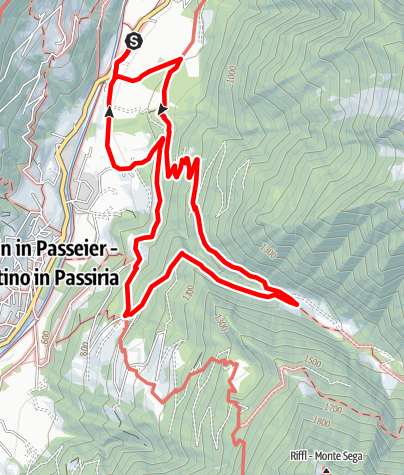 Starting point: the parking area at the inn “Sandwirt” (MuseumPasseier)

First, you have to cross over to the other side of the street then you walk briefly southerly next to the main street. You cross the main street again after approximately 200 m and follow the path Nr. 3 called “St. Leonhard Andreas-Hofer-Rundweg”. You pass a small chapel which is dedicated to Holy Mary. The path Nr. 3 leads you in direction to the forest after approximately 50 m. After almost 10 min. you get to an idyllic place in the forest which is called “Sandwald”. There you can find benches and tables for a first rest. Then you follow the sign E5 which indicates a part of the “European long-distance path”. This path you walk along in direction to the Pfandler Alp. After the walk through the forest, you go above a meadow and afterwards you cross the “Kehlmure” – the place of a former mudslide. Shortly after you reach the crossroads where you take the path Nr. 2A which is marked as “Fartleis (Alm) Erlweg”.

A broad forest road with an easy ascent and 8 hairpin bends lead you upwards and you gain height. Finally, at the ninth hairpin bend, you turn right to the actual “Erlweg”. This path was the only connecting path between the remote farms “Fartleishöfe” and the town St. Leonhard in former times. Due to the road on the opposite side of the valley, this path has been travelled much less in the past 40 years. The path was rarely used which has led to its decay. The path was overgrown and full of small stones which has made it inaccessible and even nowhere to be found. During two months in 2015, a part of the path was rebuilt. Some new walls, staircases made of stones and fences made the path useable again to the meadows of “Fartleis”. Since August 2015, the path “Erlweg” is accessible for all hikers.

After another quarter of an hour you reach a platform with an outstanding panorama. There are some benches and tables for a rest, too. Furthermore, there is a wayside cross with a picture of Oswald Tschöll, the former mayor of S. Leonardo/St. Leonhard. He was intimately involved in the rebuilding of the path “Erlweg”. Then you follow the path uphill, cross a well and find a board with information about the alder tree “Grauerle”. The path got his name from the numerous alder trees around. Soon afterwards you walk down a path through a meadow and reach the lower farm of Fartleis “Unterer Fartleishof”. At this point ends the path “Erlweg” (the hiking time to this point is approximately 1 hour and 45 min.).

Circular walk: Of course, you can also go back on the same path to the inn “Sandwirt”. Otherwise, you cross the wooden bridge at the end of the path “Erlweg” und take the path Nr. 2 in direction to the village “St. Martin”. Afterwards, you follow the path Nr. E5/5A. On this path, you pass the inn “Pfeiftal” and finally reach the starting point, the parking area at the inn “Sandwirt”, again (total hiking time approx. 3 hours and a quarter).

Hiking alternatives: At the end of the path “Erlweg”, hiking-enthusiasts can also walk on to the alp Prantacher Alm (alp Fartleis Alm). You reach this alp after a short ascent through forests and meadows whilst always following the path Nr. 2. On the way, you pass a few mountain huts before you arrive at the picturesque place alp Prantacher Alm (the hiking time from the end of the path “Erlweg” is approx. 45 min.).

Alongside the many interesting and various stages of the path, this hike offers a lot of possibilities for refreshments and sights (e.g. the natural monument “Pfeiftaler Waterfall” or the iron ramp at the “Rotwand”). Only very fit and experienced hikers should do this circular tour.

From Merano / Meran to the Passeier Valley in direction of Passo Rombo / Passo Giovo until S. Martino / St. Martin.