In climbing, a basic distinction is made between aid climbing and free climbing. Free climbing can be divided into several different styles of climbing, which are briefly explained below: Onsight, Flash, Redpoint, Pinkpoint, Clean/Trad, Toprope, Rope Solo, Free Solo and Deep Water Solo. Onsight is widely considered the supreme discipline in free climbing.

In aid climbing, the climber uses technical tools to assist in climbing, whether it be bolts, trad climbing gear or aid climbing gear like hooks and aiders. Nowadays, this type of climbing is used very little. In earlier decades, big walls were usually only climbed technically, as they could not be climbed freely due to a lack of holds or the conditions in the wall being too difficult.

By the middle of the 20th century, people had reached the point where they could aid climb just about any wall if they had enough pitons. This was followed by the development of free climbing, which aimed to climb the desired wall/area using only the climbers’ hands and feet. This does not mean climbing without ropes or belay devices, in free climbing, these are still used for belaying, but progression is done mainly without the assistance of extra devices and tools. You do not load the belaying rope, pull on gear or use the rope for a sit down/rest. In the free climbing sector, there are different styles of climbing contained within the discipline, these are explained below. It is important to note that free climbing should not be confused and equated with Free Solo. Free Solo is an extreme form of free climbing, without the use of ropes, harnesses or other protective equipment.

You climb a route under your own power, without falling and loading the rope while climbing, and you have only this one attempt. In addition, you have no prior information and you are not allowed to inspect the route beforehand. You can understand the term roughly as climbing 'at first sight'. Professional climbers like Adam Ondra and Alex Megos have climbed routes Onsight up to difficulty 9a. It's hard to imagine the pressure you must feel when you know you only have one shot to get it right.

You climb a route under your own power, on your first attempt, without falling and without loading the rope while climbing. Unlike Onsight, however, you had advance information and can inspect the route beforehand. This means that you can observe other climbers climbing the route, ask them questions, study the correct movement sequences, identify good resting opportunities or even rappel down the route in advance to study holds and possible climbing sequences.

You climb a route under your own power without falling and without loading the rope while climbing. The protection must be placed and clipped by the climber. However, the number of attempts can be multiple, as in contrast to Onsight and Flash. This style of climbing can be viewed as a potentially ongoing ambition/project, the climber can try to climb it as often as necessary until the ascent is successful.

You climb a route under your own power and without falling. The number of attempts can be multiple, as with the redpoint ascent. The difference, however, is that the protection is already placed, which means you only have to clip and not place the quickdraw yourself. There is no longer a strict distinction between redpoint and pinkpoint. Especially in the high difficulty grades, you usually always climb with pre-placed protection. 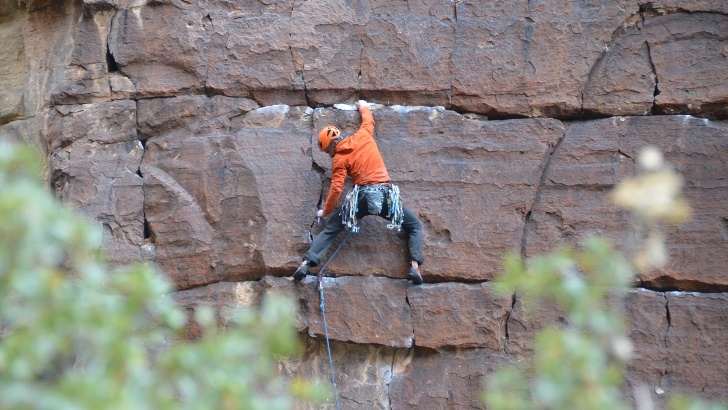 In the clean/trad style, a route is climbed without fixed belay points. Pitons are not allowed. This means that the climber places all pieces of gear used as protection (and also to build an anchor if needed) and removes them completely after the ascent. In this case, the natural characteristics of the rock are used as placements for trad gear, like stoppers, cams or slings. Recognizing placements and correctly placing trad gear requires a lot of experience, which can only be acquired with a lot of practice. Clean/trad climbing follows the ethic of leaving no traces and especially not damaging the rock, and is practiced, for example, in the Elbsandsteingebirge (GER), on many granite walls in Chamonix (FR) and in Yosemite Valley (USA). Nowadays, there are also often routes that have bolted anchors, so the climber only has to place the intermediate protection.

In general, clean/trad can be defined more as a type of climbing than as a style of climbing, since a clean/trad route can be climbed onsight, flash, redpoint, pinkpoint, as well as on toprope. In the meantime, another climbing style has been established especially for clean/trad climbing, the so-called ‘greenpointing’ where a route is climbed clean/trad even though it is protected with bolts. But it only counts if you climb the route on lead. Now, you may ask yourself why you do that when there are bolts. However, there are many reasons for this. For example, there are climbers who simply like to fiddle around with friends and stoppers, or beginners who want to approach trad climbing slowly and would like to have bolts as a backup. In addition, there may be climbers who are in an area with routes far below their own difficulty level and where independently placing protection adds a certain pizzazz. 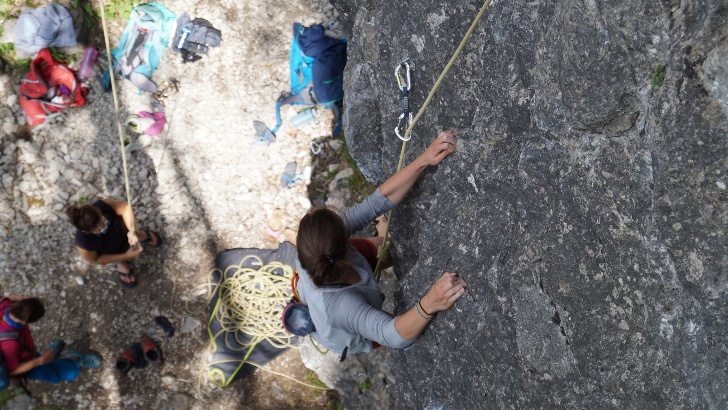 Toprope means that you climb a route belayed on the rope that already runs through the anchor. Thus, the climber is always belayed from the top. This type of climbing is especially suitable for beginners. It is important that the anchor is absolutely secure, because after unclipping the last quickdraw, the anchor is the only fixed point to which the rope is still attached. The rope must therefore never unclip itself accidentally. For example, a normal screwgate carabiner attached to an anchor with a single bolt must, as a necessity, have an additional quickdraw attached to it. The term belay station is used as a synonym for anchor, although it actually comes from alpine climbing, where you climb several pitches. As a rule, the lead climber climbs up the first pitch, sets up the belay station and then belays the following climber up from there. Then, the last climber to follow leads the next pitch and belays the former lead climber up to the next belay station.

In this style of climbing, you climb alone, that is, without a rope partner. However, you belay yourself on the rope. This style of ascent requires expertise. For single-pitch routes, you pre-fix the rope in the anchor and then ascend using an ascender (jumar) or Prusik slings as protection. If you want to climb a multi-pitch route, then you have to belay yourself while leading. You build the belay station, then lead the first pitch (while you belay yourself) and build the second belay station, where you fix the rope. Afterwards, you have to abseil the pitch in order to dismantle the lower belay station and collect the pieces of protection in between, and ascend the fixed rope again. This means that each pitch must be climbed both on lead and on toprope.

Heinz Zak, Separate Reality 5.11d, Free Solo, Yosemite-Nationalpark, Kalifornien, USA
Foto: Heinz Zak, CC BY-SA, www.commons.wikimedia.org
You climb a route solo and under your own power. Any protective equipment such as rope and bolts is not used. The equipment includes only climbing shoes, if necessary a climbing helmet and a chalk bag. A fall has fatal consequences. In addition to single-pitch routes, multi-pitch routes are also climbed free solo. Free solo climbing is probably the purest form of climbing, because you are free from protection. The most famous representatives of today's free solo climbing are Alex Honnold (USA), Alexander Huber (GER) and Dani Arnold (CH). Alex Honnold climbed the route "Freerider" (5.12d/IX+) on El Capitan in the Yosemite Valley Free Solo in 2017. The undertaking was accompanied by a film crew, and in 2019 the film even won an Oscar for the best documentary. The most famous Free Solo route by Alexander Huber is the "Hasse Brandler" (VIII+) on the Große Zinne North Face. The "Comici-Dimai Route" (VII), also on the Große Zinne North Face, was achieved by Dani Arnold in 2019 in a free solo speed record in only 46 min. and 30 sec. The alpinist Hansjörg Auer (AUT), made alpine history with his free solo ascent of the route "Weg durch den Fisch" (IX-) on the south face of the Marmolada in 2007.

This refers to free solo climbing over deep water, which catches the climber in the event of a fall. Deep Water Soloing (DWS for short) walls should ideally be vertical, at best even slightly to strongly overhanging, so that in the event of a fall one does not land on bands or ledges, but directly in the water. Depending on the height of the wall, however, the water impact and depth must be considered. You can reach the base of the wall either by boat, rappelling down the wall or climbing sideways. Most of the time you have to jump into the water after climbing through, only rarely there are routes where you can get off at the top. If you fall into the water, or you have to jump into the water at the end anyway, it takes time until your climbing shoes and chalk bag are dry again and you can climb a new route. In the best-case scenario, the climber has provided themselves spare equipment.