At the edge of a green glade on the slopes of the Vigolana, the Rifugio Paludei is an immediate hit with children with its outdoor games and farmyard animals scratching about in an enclosure. It is also a hit with their parents with its typical Trentino cuisine. The refuge was opened in 1949 by the Mattarello branch of SAT (Association of Trentino Mountaineers) , who built it out of the ruins of an old building, possibly an old customs house. The refuge - renovated several times - also hosts introductory mountain skills activities for children from schools in Trento’s suburbs. Open From 20 June to 20 September On weekends during the rest of the year Before leaving for your hike, always contact the manager to verify the actual opening of the mountain hut Walks The walk from here to the Rifugio Casarota takes 2 hours (difficulty EE), while it’s an easy walk of just over 1 hour (difficulty E) to the Rifugio La Madonnina (currently closed). More challenging is the walk to the Madonnina bivouac hut, which takes 3 ¾ hours (difficulty EE).

Number of beds in dorm
12

By car on the Frisanchi road, a turning off the Via della Fricca main road near the Albergo al Bosco shortly after Pian dei Pradi (coming from Trento). On foot from the Rifugio La Madonnina (currently closed) on the forest track known as "dei Catalani" (1 hour, difficulty E). 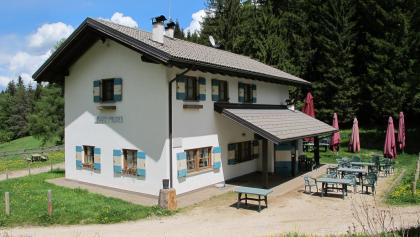 Booking
at the travel destination