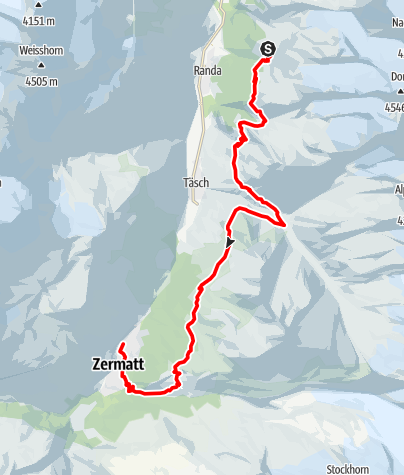 Today's route continues to travel through unstable and exposed terrain. It is important to receive current trail information prior to leaving the hut.

It is possible to skip the very last section of descent by taking the Sunnegga Gondola into Zermatt.

Continue following the well signed-out Europaweg as it first heads toward the Dom Hut, eventually branching off to descend to the impressive Charles Kuonen Suspension Bridge. This bridge is almost 500 meters long and is one of the highlights of the Haute Route. Continue after the bridge on an innocent trail through the woods, a peaceful prelude to the upcoming climb aided by fixed ropes.

Just after the turn-off for the Kin Hut, the path enters a tunnel and then crosses a stream on a steel bridge. Continue contouring around, eventually dropping in elevation and then reaching a series of avalanche protection structures. The route then needs to cross the Täschbach Valley, where it contours deep into the the back of the valley to the Europaweg Hut, crosses the Täschbach and then contours back out.

As you continue traversing toward the Matterhorn, views of civilization become more present. Upon reaching Tufteren (also known as Tuftra), several descent options to Zermatt are available. The official Europaweg descends from here, but the Haute Route continues on through Sunnegga (gondola descent available). So continue traversing, now on a dirt track, to the scarred ski area of Sunnegga. From there, follow the signs straight to descend to Findeln and then continue into Zermatt.

Congratulations on completing the Haute Route!

Zermatt is accessible by train